In the  winter of 2010, with the snow laying "deep and thick and even" I visited the top North Wales racing loft of Tony Murray & Sons of Brymbo, a small village situated a few miles from the North Wales town of Wrexham. With me on that hazardous journey from South Wales were a number of other fanciers including Ray Strawbridge, Wyn Llewellyn and Jimmy Bullock and we were joined by local "ace" Darren Roberts.
Such was the quality of the pigeons housed at Tony's loft at that time that I was far from surprised to learn that in 2013, Tony had won the Queen's Cup awarded by the WHPU annually to the pigeon with the most meritorious performance[s] over 300 miles in races organised by a WHPU affiliated organisation.
It was not long before I was on the phone to congratulate Tony on his pigeon's great series of performances and this article has come about as a result of our latest phone conversation.
Tony is from Northern Ireland originally and hails from the town of Killyleagh, made famous by such outstanding pigeon fanciers as Billy Parkes and Arthur Walkingshaw. In fact the late Billy was a near neighbour of Tony’s and as Tony said, he was a true gentleman and a genius with pigeons. Before moving to North Wales, Tony lived for some time in the Llanelli area of west Wales and made many friends there.

Since moving to his present address some 30 years ago, Tony has developed a truly outstanding family of multi-purpose racers that win from 60 to 560 miles in all winds and weathers and at velocities ranging between 500 and 1900 yards per minute. These are based on just three direct imports, one hen from the lofts of Heynen & Son of Gronsveld in the Netherlands containing the bloodlines of Sheck 666, The Pau and Plato. These have been supplemented by pigeons of Adonis and De Barcelona lines from the loft of Marc Verschelde of Zulte in Belgium. The final element in the melting pot was the bloodlines of Buffel, Dicky and Samurai from Dr Henk Deweerdt.
All the above breeding lines contain the bloodlines of Desmet Matthys, Van Der Wegen and Jan Aarden. John Wheatcroft of Pinxton in Nottinghamshire was a great help in sourcing these birds and I know that Tony greatly appreciates John’s help.
The “mother of the loft” is a lovely petite chequer hen ringed in 1998 which has left a loft full of winners when mated to the Verschelde cocks. At the time of my visit in 2010, every pigeon in the loft, with the exception of one recent import, was bred down from this hen through her sons and daughters. During our visit we handled bird after bird and all showed the same characteristics, being small to medium sized with superb feather quality and truly outstanding eyesign. This latter fact was not surprising as Tony admitted that he is an eyesign fanatic and from what we saw on our visit, he certainly knows what he’s looking for in the eyes of his pigeons. We handled winner after winner, not just in club racing but also at federation and national level, including five pigeons that had been timed in channel races to be the only birds on the day.
One chequer cock who looked and handled like a dream had 3 x 1sts Section in the Welsh SENFC to his credit and since being retired to stock has bred winner after winner as have his children. Incidentally, this cock’s section wins were from Maidstone, Liege and Bonn, oh and he also won Bird of the Year in 2004 and 2005. Unfortunately this great pigeon was killed by a peregrine whilst out at exercise in early 2013.
Yet another top class racer was the blue cock a winner at club level of 6 x 1sts and 1st Michael Johnston Memorial 2 Bird as well as no less than FIFTEEN National prizes at section level plus 5th & 15th Open National. He was then put in the stock loft to breed winners including 5th and 6th Open National prize winners.
A three year old chequer cock was another multiple National prize winner with TEN section prizes at National level, including 1st section only bird on the day from Bonn.
A four year old late bred chequer cock came to hand next and this one also had TEN section turns with the Welsh South East National to his credit, returning from the  540 mile plus Sauverne race  in 2010 badly hawked, and yet he still won 5th section National.
I could go on and on detailing the many winning pigeons housed in this loft but I think the aforementioned adequately describes the outstanding quality of this very close knit and inbred family of “gutsy” racers.

Readers will have noticed that all of the positions outlined above have been achieved with cocks. Many will therefore conclude that the birds are raced on the widowhood system – and they would be wrong. Tony races his birds on the "Billy Parkes system". Hens are only raced a couple of times as young birds after which time they remain at home and the cocks undertake the race workload. In 2013 Tony began the season with just 10 cocks as the local raptor population had whittled his original team of 16 cocks down to this number whilst out at exercise before the start of the season.
The racers plus stock birds are mated at the same time, 14th February, and are allowed to rear a team of no more than 20 – 30 youngsters. The race team were given just two 13 mile training spins before the first race and then raced weekly throughout the programme both inland and overseas. The usual practice is that at various stages during the season, some hens are removed and the cocks raced celibate/widowhood before being re introduced to their mates later in the programme. This ensures that Tony always has some birds fresh and motivated for the races as they are in different nest conditions. However, in 2013 the cocks were raced on pure widowhoodwith various motivational tricks played on them to gee them up for the National races.
The old birds, even when on widowhood, are allowed an open loft to come and go as they please from dawn to dusk with no forced exercise. Forcing the birds to fly would, in any event, prove impossible as the loft is, as mentioned earlier, literally “shoe horned” into Tony’s small back yard and is within touching distance of the house.

Versele Laga Gerry Plus is fed at each evening meal whilst the birds are racing inland and this is switched to a high fat mix in the run up to the longer channel races. The racers' morning feed comprises a seed mix that Tony makes up to his own specifications. The cocks also have access to a pot of barley to eat at will. If all the barley is gone by the time of the evening meal then Tony adjusts the amount fed to the cocks accordingly.
Young birds are raced only sparingly but Tony does like them to have plenty of training tosses to educate them in the year of their birth.
They are weaned on VL Junior O to which Gerry Plus and barley is added as the season progresses. The young birds may be given a couple of short races in the year of their birth but very often Tony is quite satisfied if they are well trained out to 50 miles and are then left to grow on naturally. There is no darkening at the Murray loft.
As far as medication is concerned, Tony administers the Henk Deweerdt medication programme as and when necessary using the Deweerdt products prescribed.

This is literally "shoe horned" into the small space adjoining the house and is a double storey affair, squeezed into the yard at the rear of Tony’s home. The main racing loft measures just 12ft x 10ft with a small stock loft on the ground floor which houses the seven pairs of stock birds plus corn store. The top floor racing loft has three sections, one housing the racers a second housing the young birds and a third for the hens during their temporary separation from their racing mates. Each section is cleaned every time that Tony enters the loft so as you can imagine the loft is spotless. A litter of floor granules covers the floor and this is raked over each day and any droppings removed. 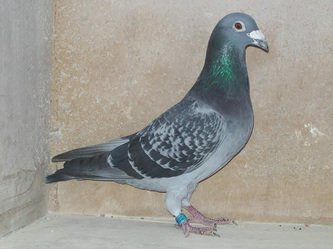 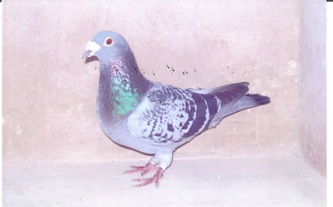 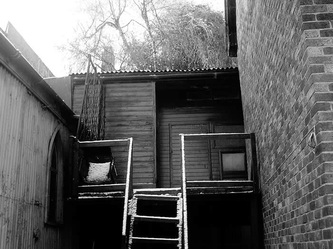 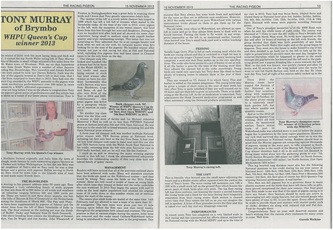 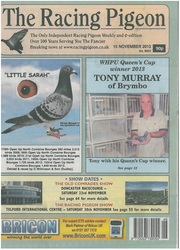